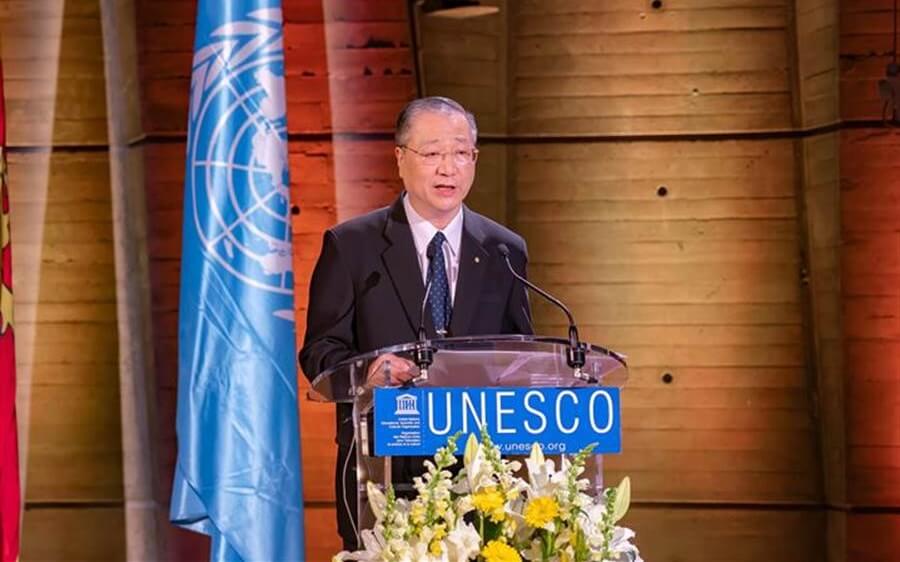 PARIS, (June 22, 2019) – Australia Oriental Media Buddhist Charity Association announced today that Mr Richard Lu, their Chairman and a Buddhist spiritual teacher with 10 million followers from around the world, was invited as a keynote speaker for the 2019 Commemoration of the United Nations Vesak Day. This marks the fourth time that Richard Lu has attended this important event in the Buddhist calendar, which was held at the UNESCO headquarters in Paris, France on May 23, 2019, with the theme of “Buddha’s teaching for building sustainable peace through multicultural education and communication influenced by the Thripitaka.”

The opening ceremony started with lighting of the oil lamps, officiated by dignitaries including the Permanent Delegate of Sri Lanka to UNESCO Buddhi K. Athauda, former Cabinet Minister of Sri Lanka, Ambassadors to France and Permanent Delegates to UNESCO from Iraq, Pakistan, Thailand and Myanmar, the Deputy Director-General of UNESCO, and Richard Lu.

The opening ceremony also featured messages and remarks from ambassadors from participating countries and religious leaders. During his keynote speech, Richard Lu highlighted the importance of the core values of compassion and harmony embedded in Buddhism and traditional Chinese culture in achieving world peace. He also stressed the role of faiths and the media in resolving disputes in the international community.

For years, Richard Lu has been dedicated to promoting peace in every corner of the world. His efforts have been recognized by the international community. He has been given an Honorary Visiting Professorship by the University of Siena, Italy, a Lectureship by University of the West of Scotland, and an Honorary Professorship by an international Buddhist university. Master Lu has given talks at established universities such as Harvard University, the National University of Singapore, and Sydney University. His talks discuss traditional Chinese culture and Buddhist wisdom, blending the essence of various disciplines such as psychology, Buddhism, Confucianism and education. Through almost 200 public talks, Richard Lu’s message of compassion has helped over 10 million people overcome daily challenges and difficulties and regain a tranquil state of mind.

Richard Lu has been presented with various awards and honors in recent years. He has been awarded the title “Ambassador for World Peace” at peace conferences taking place in the UN headquarters, the U.S. Congress, the Museum of Tolerance in Los Angeles, the British Parliament and in Berlin, Germany. Master Lu is also a well-known media leader in Australia and has met with Australian Prime Ministers John Howard, Kevin Rudd, Julia Gillard and Scott Morrison. His contribution has been recognized by the government and mainstream society. Master Lu was also presented with an Honorary Citizenship by the West Orange city council in New Jersey.

Richard Lu currently serves as Chairman of the Australian Oriental Media Buddhist Charity Association. The charity has been registered with the Australian Government for years and has affiliations and branches all over the world, including New York, Los Angeles, San Francisco, Canada, the U.K., France, Germany, Malaysia, Singapore, Indonesia and Hong Kong. The charity has been supporting all kinds of disaster relief programs and initiatives aimed to help children and the elderly affected by disabilities, diabetes and mental health issues. Its donations have reached $1 million AUD.

Initiated by Richard Lu, Over 100 Community Organisations Celebrate the Moon Festival and 70th Anniversary of Motherland